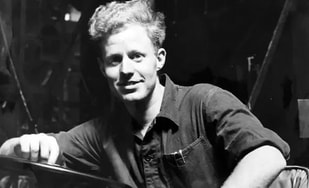 My reflections focus on my late father Canon Tony Williamson, about whom I’m writing a memoir. He was a ‘worker priest’, an ordained Anglican priest who chose not to have a parish but rather to do manual work alongside other workers. His job, for 30 years, was driving a forklift truck in a car factory in Oxford. He was also chair of the factory’s branch of the Transport & General Workers Union for many years.

To my knowledge he never identified himself as practising feral spirituality, but I think the idea would have appealed. It was partly the closed and blinkered nature of the institutional Church that drove him and a handful of other young priests (along with their partners and wives) in the late 1950s to break with career expectations and prioritise simply living out Christian values in workplaces and working class communities, and seeing where the journey would take them.

He expressed his frustration with the Church in a sermon in 1961. He had been in his shop floor job for a couple of years, emersed in what his local paper, reporting on his ordination, called “the din, the sweat and the manual grind of a car factory”.

“The salvation that our Lord taught was a real wholeness of living which involves treating every person, animal and material thing as God means them to be treated” he told the congregation.

“Of course this involves attending church to say thank you and sorry to God, to worship Him and to receive His power to go forward in the world. But it also involves the social, mental and physical environment so that we may find joy instead of frustration in living and so that as individuals, communities and nations we may really love our neighbours as ourselves.”

And what was the Church actually doing? “The things that occupy most of the time of clergy are church services..church clubs, church meetings , church organization and sick visiting, much of which is of church people”.

This perspective stayed with Tony all his life. He did not reject the Church – he took services regularly all his life, until only a few weeks before his death. I think he drew spiritual nourishment from Church rituals, despite their limitations. Shortly before he died, aged 85 he told me: “We had a Lent course this year(in his parish church), a discussion group. It was about the Bible and its interpretation. I wish there had been a twist in the course – ‘so what are we doing?’ People could have brought up the issues they are facing. But this is not easy. If we take our Christianity seriously we have to think about it in this way, and not just study the parables. This doesn’t get you far”.

For myself, I identify an element of my father in me. I feel most comfortable living out my Christian faith in practical ways, through my work as a human rights activist or my volunteering in a soup kitchen for homeless people. The Church as an institution is part of me due to my upbringing, but what happens when church services end feels most important.

Hugh Williamson is a human rights activist and writer and lives in Berlin. He blogs at www.hughwilliamson.org